Plague is a real-time top down â??rogue-likeâ? arena shooter pitting humans against the zombie horde, inspired by the games Syndicate, XCOM and Gauntlet.

benedict carter
(benedict)
Plague is a real-time top down â??rogue-likeâ? arena shooter pitting humans against the zombie horde, inspired by the games Syndicate, XCOM and Gauntlet.

If you want to help with the development of Plague, let me know on the blog site listed below. Code, art, sounds, music, design and testing are all welcome.

In the future Plague will have new features like modifiable â??RPGâ? stats for sims, RTS base building and base defense missions, a day/night cycle, resource management, inventory for sims and the Zombie Plague will continue to mutate as the game progresses. See the To Do lists in the ReadMe for more detail.

Current Features:
-Zoom in and out at anytime to see the level â?? no mini map required -Non-predictable procedural level generation -Vision based on line of sight -AI for all sentient sims -Memory based on what was last seen. -2D physics engine powers object interactions and motion -Finite element modeling of explosions, fire, etc -Fire modeling that allows objects to catch on fire and be destroyed -Lots of firearms, concussion and incendiary grenades, Molotov cocktails

So I've just picked up Code Complete, and I'll be reading through that before working on Plague - see if I can learn some stuff to reduce the complexity in Plague to increase the speed of development. I'll probably then refactor/recode large amounts of Plague with better coding practices which will mean no visible development for a while - hopefully there will be speed improvements though and the end product should be much easier to continue development on. The plan is then to stop working on the "battle" simulations and get onto the strategic game layer. Adding features to the battles can resume once theres some more context for them. I've also picked up a couple of AI programming books. Once I've worked through those I'll upgrade the AI infrastructure from a state machine. As always, if anyone wants to work on this, feel free; either drop me a line in the comments or send me a gmail to benedictnz. One thing that would be particularly good is a fast implementation of an A* like pathfinder - I've got one written in python, and its good (and since its written in python, easily modified) but with 10AI using it things get kinda slow. The other issue thats been bothering me for a while is the simulation will "pause/lag" for a fraction of a second every couple of seconds when doing grunty calculations (eg: calculating partitions during the tech demo). I have no idea why. Does this happen to you? If so, do you know why? If so, can you provide advice or a fix? If it doesnt happen to you, can you let me know your system specs and OS? Finally fixed annoying ammo bug (I think) - still some other bugs to do with removal of shrubs and rocks, but not worth worrying about right now. Added smoke trail to Rocket Launcher. Altered petrol dispersal from molotov grenade. Updated "kill" method of Sim.check_boundary() changed the way sim command destinations are updated (to decrease and distribute cpu cost) corrected 2 errors in resources.py that led to incorrect images for memorised pistols and shotguns improved manual map building functionality rocks create smoke when destroyed 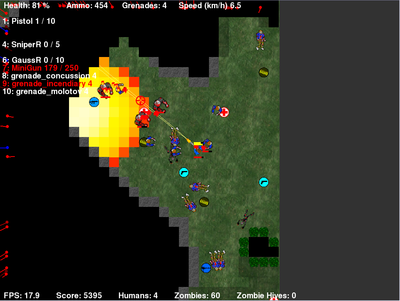