DynaMaze - Tanks in a Dynamic Maze

Kurt Dekker
(kurtdekker)
Fight endless hordes of enemy tanks, gunbases and helicopters as you search for their headquarters in an ever-changing maze. When you find the headquarters pummel your way through the shields and destroy the base within.

Notes for the v0.2 release: - bugfix: no more walking through aliens - you go *BOOM* (not helicopters obviously) - bugfix: no more infinite ship awardings (only every 10000pts) - bugfix: tanks give you points for killing them - alien generation is much more interesting and aggressive now - destroyed aliens leave behind craters - your shots fragment into tiny bits on the final frame they hit - removed coin pickups (they were incongruous to this game) 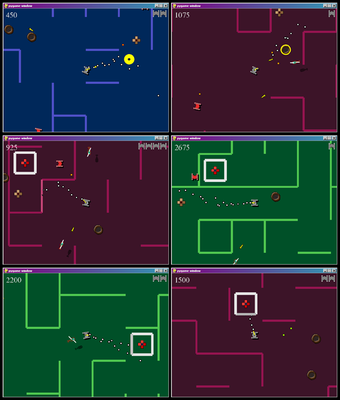