Charles Cosse
(ccosse)
Featured Languages:English, French, Spanish, Italian, German, Latin and Swahili. Example of use: You select to use the "English-French dictionary"; then, for each English word put-down on the scrabble board, the definition, in French, will be written to the HUD (see screenshot). This makes a nice screensaver, if you don't care for Scrabble. The application uses dictionaries from the xdxf project. Special characters, accents, circumflex, cedilla, etc are all handled by unicode.

TuxWordSmith 0.3 is Word Scrabble ala TuxMathScrabble. There are both "auto" and interactive modes. It uses dictionaries provided by the XDXF project. Current languages are: English, French, Spanish, Italian, German, Latin and Swahili. Even if you don't like Scrabble, the screensaver mode is a good way to improve your vocabulary, or learn new words in another language. For example, if you select the English-French dictionary, then for every word submitted the definition will be printed to the Heads-Up-Display (HUD), in this case the definition would be in French. 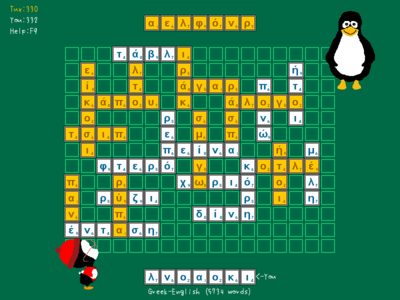