A relatively simple map editor! (hopefully someone will find this useful!)

I made this mostly for amusement and learning, but I think I may attempt to make a game to go along with it eventually.

I have designed the editor to store a map as a file with three arrays - one for graphical tiles, one to keep track of where you can and cannot walk, and one for 'objects'.

To add tiles (or objects), simply add sprites to the gfx folder and name them in the same pattern the others are named. (e.g. If I want to add a tile [as I only have included 10], I would add a file called 'tile11.bmp') It is set to attempt to load 20 tiles and 20 objects initially, but this can easily be modified by changing the initial value of the num_tiles variable. 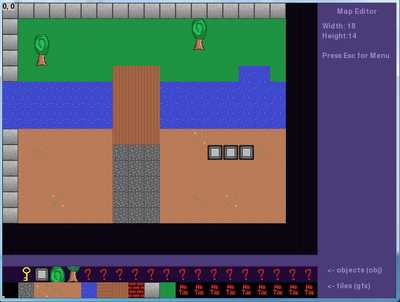