Anonymous
(pywiz32)
This is a a basic breakout clone. Made in about an hour.
Controls:
up and down arrows for menu
mouse for paddle
return to select in menus
return to pause in game

Credit goes to pymike for creating ez menu, which I used in this project.

Note: (<=0.3)
This game's collision system is not perfect. I would have to do a ratio on the overlap of the collision objects(used in >=0.4). I just was lazy so I could get these changes out, so a gui in the game, better collision(>=0.4), and better graphics will come later.

Added a level editor, made a menu, made several levels, a final screen, and a points and deaths system. 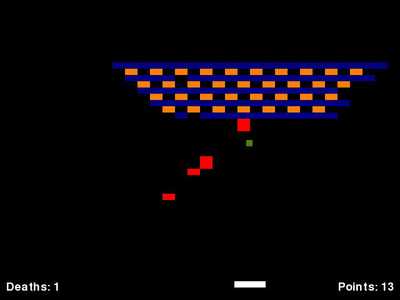