A 2D computer role-playing game in the early stages of development.

axed code
(axedcode)
BloodCurse is a free fantasy role-playing game written in Python using the Pygame library, similar to old console RPG's but with newer graphics and audio. For the latest information, visit our website at http://bloodcurse.info

Well Brian Moriya has quit the team due to...food poisoning. I have not heard from him in a couple months. Once again I am alone on this project, but that isn't stopping me. Many additions since my last release here:

- Map now read from an INI file instead of a flat file
- Added a basic state machine and a menu.
- Character now knows what type of terrain he is on (for determining monsters for battle).
- Hidden regions within a map - for hiding boss and other battle locations.
- Fixed bug 356538. Player now stops triggering move events when obstacled. (no more walking in place).
- Made transition tiles transparent in order to greatly reduce needed bitmaps.
- Fixed map scrolling bug causing the foreground to be 1 frame ahead of the rest of the game.
- Started working on monsters and equipment. Not implemented graphically yet.
- Completely rewritten map system.
- Cleanups, bug fixes, more efficient imports and better structured game loop...game now runs faster, less buggy, and easier to maintain.

This project has been moved to GitHub. Please visit: http://github.com/axedcode/bloodcurse/tree/master 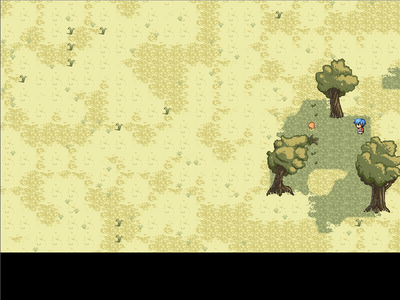