Explore the 2D Wuxia World, train with the Elite Four or join renowned sects such as Shaolin and Wudang, acquire powerful items and complete quests to learn new moves and skills, and more! Will you choose the path of chivalry or take advantage of the weak to obtain power and riches? Do you have what it takes to win the Duel at Huashan and claim the title of "Number One in the World"? Begin your adventure in Wuxia World today!

WuxiaScrub
(WuxiaScrub)
Open World Chinese Fantasy Martial Arts RPG, turn-based battles, 30+ hours of game play (to cover most/all plots & quests), 125+ items, 80+ moves/skills, 7 (+1) different Sects/Clans to choose from to train with early-game (or you can go Rogue), and a high degree of freedom. The choices you make influences who your friends/enemies are, how future plot progresses, and which attacks/skills/rewards you can learn/claim. See Release Notes here: https://bitbucket.org/WuxiaScrub/wuxia-world-readme/src/master/README#markdown-header-release-notes 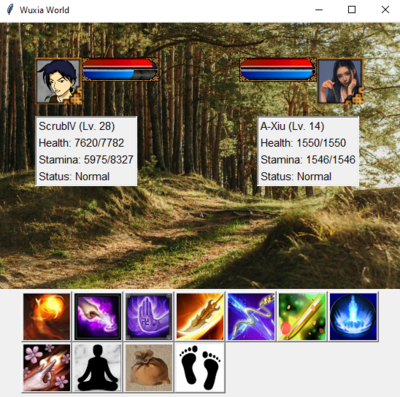