A 3D comic parody of action-adventures.

Carl Banks
(aerojockey)
The beautiful, redheaded, and obnoxiously thin Princess Carmeana has been kidnapped and held ransom. The King, not wanting to incur the expense of deploying the army, decides to recruit a "fairy boy" to Rescue the Princess™. Meanwhile, there lived a poor farm boy named Kai (pronounced "Lance"). One day as he was trudging back to town, he encountered a fairy named Tabitha and saved her from financial ruin. Tabitha decided to tag along with Kai for awhile (it was the least she could do). As luck (or Destiny, depending on whether you believe Tabitha or Kai) would have it, they soon encountered an army recruiter who was looking for a "fairy boy". Kai's Glorious Quest™ to save the hot rich skinny redhead had begun. -------- NOTE: The Ditty of Carmeana is now available on Steam, HOWEVER the Steam version is not based on PyGame. Still, mega thanks to PyGame for helping it get started. The Demo is still available to download for free from IndieDB, and still based on PyGame.

The official Demo version of the Ditty of Carmeana. You can download Linux versions from the IndieDB site as well. Not open source, sorry. 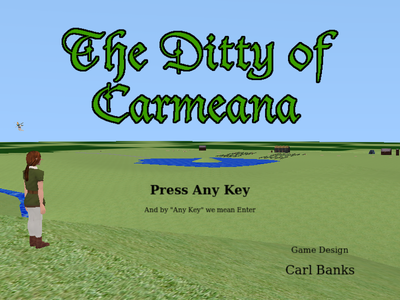