Resheet
(mint)
Fight the vicious alien race known as the Specters for control of planet Earth. Sabotage starships, kill robotic enemies, and explore underground lava caverns in search of Specter troops. 3D FPS made with PYGGEL and Psyco. The game does run a bit slow sometimes so it's advisable to close all other programs like internet browsers etc. This is merely a demo, so there are only four missions and no story to go with it. I do have a story planned and you can see parts of it if you go into gamelib/game.py and look at the tops of the functions makeMapOne etc. Twenty missions are planned but I desperately need ideas so if you have thoughts on how to improve existing parts of the game or add new parts or plot ideas... I'll welcome anything. As long as it's reasonable. Anyways enjoy and tell me what you think. 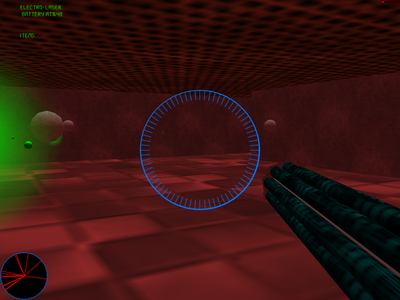