It's a Roguelike, done up in python with pygame, currently in "really early" state of development.

David Hahn
(hahn)
Note: currently this runs off pygame 1.8.1.
What you need to do to run the thing:
Go to source link, get the files, and run it. You need numpy, python, and pygame--no py2exe yet for windows, sorry. Numpad moves you, bump into things to initiate combat, Scroll Lock takes pictures. See the readme for more.


What it is:
It's a Roguelike in Python. For now you can call it Project Graff. For short, you can call it PyRL if you want, although Graff is probably easier. And I think PyRL is taken by some other project, but when I made the blog's title I did not know that.

Put simply, it's my attempt at a Roguelike in python with pygame, which started as a project to help me learn python. I'm planning on deviating quite a bit from the roguelike formula later on, but for now I'm concentrating on making the standard-fare roguelike; I'll branch out later when I have the important stuff in.

Stuff to know:
Home page has more info..
Readme has more info.
Comments? Make 'em here or on the blog, I'll see them either way. Blog comments show up in my inbox though--odds are I'll see those a bit quicker if you really need to talk to me. 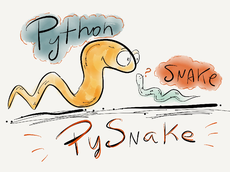