A computer implementation of the game of Canasta. Can be played in single-player mode, or by multiple players over the Internet. Requires Twisted in addition to python+pygame, but the Windows executable should work out of the box without any additional installs.

I'm a novice at Python, and this is my first attempt at writing a game with it. Canasta is mostly awesome, to me, because of its social aspects, so this program focuses heavily on the multiplayer element. You can start a game and have other players connect to you over the internet, as long as you have an accessible IP address and an open port. A chat window is provided throughout the game for players to communicate with each other.

A one-player game is available as well, although the computer opponents are still in a fairly rudimentary state.

If you don't know how to play Canasta, a Google search will turn up some good explanations. When you start the game, you can hit F1 to see a brief explanation of the controls. There is also a manual included in the form of a text file. 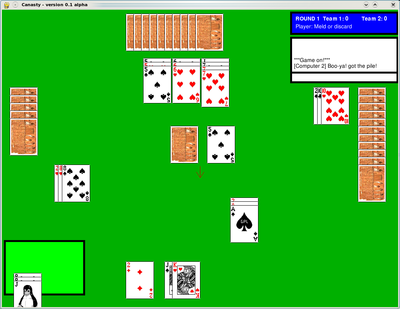