PyCave is a clone of the game SFCave, but with 3D graphics.

Sergio GonzÃ¡lez
(monachus)
pyCave is an addictive 3D clone of the game SFCave, with nice graphics. The goal of the game is to fly a damaged ship inside a tunnel, avoiding obstacles. Games of the same nature you might know of are the "Helicopter Game" or "Jetman" in facebook. The game is written in Python and is currently in beta stage. A 1.0 release is pretty close, 99% of the game is done. You can get it from the 'Download' page. My motivation was that I loved spending hours playing SFCave on a friend's Palm Pilot when I was in middle-school. While I don't dislike the Helicopter Game or Jetman, I wanted to write a game with a feel closer to the original.

Second beta. UI was completely rewritten. A lot of compatibility issues have been resolved. Should now run on a much wider range of machines. 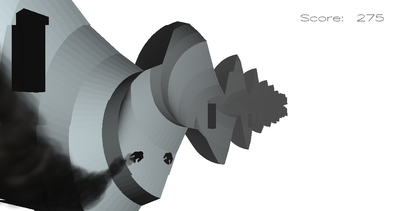