Tetris written in 73 lines. Left, right, up rotates, down pushes down, space drops. Game over to quit. :P And yes, the code is obfuscated on purpose. :P Enjoy decoding it =)

Jordan Trudgett
(tgfcoder)
Tetris written in 73 lines. Was originally 150+, then
removed comments, extra space (indentation spacing and also
"x = 5", "6, 7, 8, 9" spaces for example) and put anything possible onto one line, separated by semi-colons.
The code itself is 2.6K and is 73 lines (probably can still be shortened.)

See if you can work out what each part does! (The list
manipulations would be the trickiest, I think.)

I was inspired by a similar tetris game written in 256
bytes... it probably does less than mine, but I thought it
was still damn impressive. :P
For a less sadistic approach to Python, see my
masterpiece-in-progess, Ardentryst. 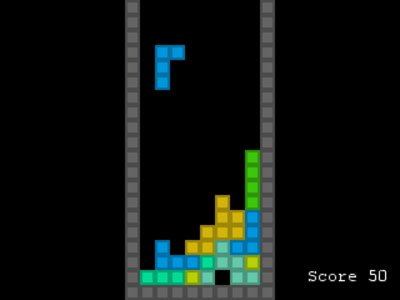