Engage is a turn-based fleet combat simulator based on the Star Trek universe and the 80s console game Begin.

Ryan Brignoni
(castral)
The game is modeled after an old console game called Begin. More information about Begin can be found at http://en.wikipedia.org/wiki/Begin_%28computer_game%29 The major differences between Engage and Begin is that Engage plans to revamp most of the major game systems like weapons, damage and movement. Begin had a lot of good concepts to start with but a few things were either partially implemented or did nothing. Currently Engage has a mostly-working gui system and a command parser that I'm planning to revamp to work over the net. If it seems sort of hackish, thats because this is my first attempt at a game and python and pygame all at once. Any help would be appreciated. 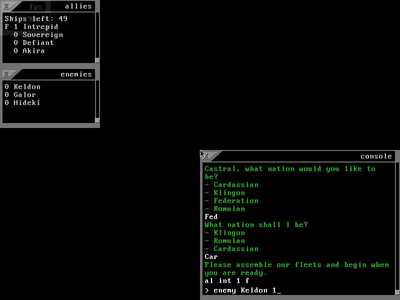