Oldest known board game. 2 500 BC Mesopotomia. You play against the computer. Similar to Ludo. Intended as a minigame inside a larger game, but here a standalone game. This version has very little player test time, feedback is appreciated

Per
(PerKGrok)
Video of test play
https://www.youtube.com/watch?v=3x65-yCl0QI&t=86s
Two players.
Each player should try to move all their pieces from start to goal. The first with all pieces in goal is the winner.
It is a turn based game with dieces. There is four dieces each returning the value of 1 or 0. A throw of the dieces will return a total between 0 and 4. That is the number of steps the player should move one of his pieces.
There are five rosette on the board. If a piece lands on a square with a rosetta the player gets an extra throw of the dieces.
There can only be one piece on a square at the time. If a players piece lands on a square with a piece of the opponent on it, the opponets piece will be sent back to start. If the square have a rosetta on it the opponent's piece will be safe. The player may not make that move.
When a pieces is leaving the board going into goal it must be with a throw with the exact number of steps needed.
If the player throws a 0 or if there is no move that the player can do the turn goes over to the opponent. A player may not pass his turn without making a move if a move can be made.
This version have four pieces for each player. The original game seems to have had seven.
In this version you will play the white side against the computers black side.
You throw the dieces you by clicking on them. You chose which piece to move by clicking on it. If there are no moves that you can make, you click on the button "Pass". 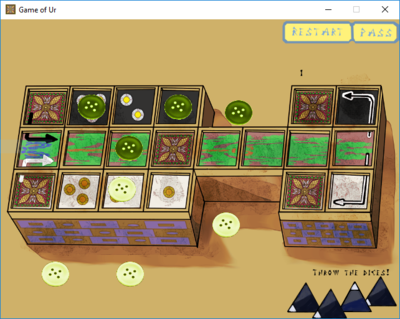