A game library built with PyGame library, with many built features that make it easy to build your own creation from the ground up, by LeapBeforeYouLook and Ramaraunt.

Daniel Valcour
(Ramaraunt)
A friend and I are working on a game engine in Python. Its open source. Its built on top of Pygame, so it has a lot of things you can do. You can literally recode the entire engine if you wanted, so you have a lot of power. But it is also designed for ease of use, with many built in classes that allow you to quickly do complex tasks. There aren't many classes built in yet, but we plan on eventually releasing more. To explain better how the engine works, look at the image diagram. It is a lot similar to node based game engines like Godot and Unity. It also shares similarities with GameMaker. First, you instantiate a game object, which handles everything deep down. Then, you instantiate room objects, which act exactly like rooms in GameMaker. In each room, you then add objects, and code those objects to do what you want every frame. Attached to objects, you will be able to add things like sprites, rigidbodies, pathfinders, hitboxes, and many more things which we are working on. So it has the benefits of both worlds: the ease of use of engines like Godot and GameMaker, while still maintaining the power and customization of Pygame, and all the benefits of fully blown Object Oriented Programming. One issue (or good thing, depending on your opinion) with this engine, is that it doesn't have a GUI associated with it. Instead of manually setting up relationships between objects in an IDE like GameMaker, you have to code them. Maybe someone could eventually come up with a solution for a new IDE. Of course, this engine is open source, and we have no plans to ever monetize it. So its fair game for any project, commercial or personal. However, the license requires that you credit us for creating the engine. If you would like to help with this project, please ask me, and I will invite you to the team. If you have any questions, please post them bellow so other people can see them. 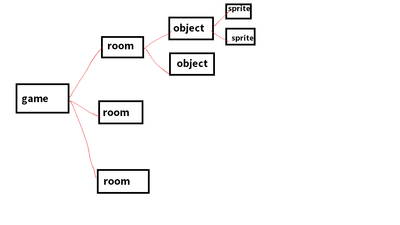