rpeg is a game engine and editor designed to create roguelike, FTL-styled games.

Eric
(zhang)
rpeg is a package that included both the editor and game engine used to create a personal FTL styled game. In the spirit of open source I would like to release that engine to the online community in case so that anyone else with similar goals could use the game engine to create their own rogue-like games. The engine was designed with a very specific game archetype in mind and as such is not a general purpose game engine. Furthermore, additional changes to the game engine must be extended by changing the source code directly which is not very well documented at the moment which is a goal that we would like to have in mind for the future. The rpeg package comes with a data editor used to add various elements (events, monsters, items) to the game and was built with intention of building an FTL like game in mind and is not very extensible in its current iteration. You are free to change any part of the code base to adapt to your own specific needs. 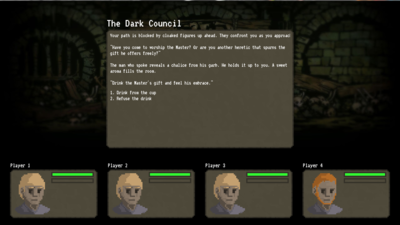