This is a fairly standard bullet hell shoot-em-up, similar in design principles to Touhou. It features grazing: grazing occurs when an enemy bullet collides with the player ship sprite, but not the player ship hitbox (visible in focussed movement mode). Grazing gives you points and fills the graze bar, which, when completely filled, surrounds the ship with a shield that will negate the next hit.

Best played in a 600*900 window, but is resizeable.
Default controls (re-bindable):


As this is an early version, I'll probably use whatever feedback I get to balance the levels' difficulties...

The .zip download contains all assets, source .py files, and an executable for windows made with py2exe via the pygame2exe script. 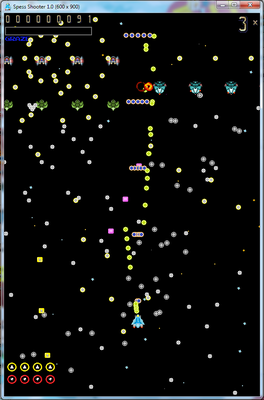