Eat the radioactive carrots, blast the zombie foxes with your telekinetic super powers, and don't let anybody nibble your ears!

You play as a bunny in a post apocalyptic world. The only place where carrots still grow are in cemeteries because of their fertile soil. However, zombies grow in cemeteries too, especially zombie foxes. They are a bit slow and a bit dumb, but they are legion. You hop and run between your foes and try to gather all the carrots before too many zombie foxes hit you. Fortunately, the radioactive carrots give you strange abilities. With each carrot you eat, your super bunny mind can create a telekinetic shock wave that will repel and maybe even kill the zombie foxes. Let’s see how you long you can survive ! Don’t become a zombie bunny.

This is a short game I made as a proof of concept. I'm working on a bigger game called Infiniworld, but I needed to make sure that the engine I wrote could actually lead to something playable. I gave myself one week to use the Infiniworld engine as it is now into a game, and Apocalypse Bunny was born! My girlfriend loves bunnies :).

There is a physics engine inside using a RK4 integrator, and a collision detection+correction code I wrote specifically for the tile-based nature of the landscape. I apply a model-view-controller pattern, so most of the code could be reused with another renderer than pygame (anyone interested in a curses port ? :D). The game loop decouples the rendering from the physics and the processing of the inputs. The 'GUI' code is horrendous. I have a side project for that and I'll merge it in Infiniworld at some point. But for now, I wanted a game that worked, and this one does! 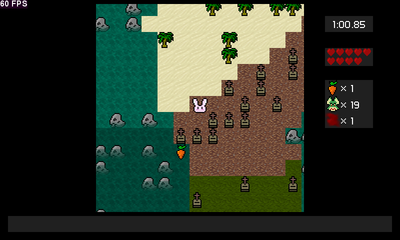