A simple blocks game made with python and pygame.

Update 2013: I can't get the OpenGL stuff to work like I want it to, so the project has been totally iced. It's too bad, since what little works looks a lot more awesome than the game so far.

Early alpha release of a blocks/columns game. Used python 2.6.4 and pygame 1.9.1 for developing, but it may run on others. Tested on Ubuntu Linux and Windows XP, but I haven't had the chance to test any other platforms. The alpha release is buggy and has several routines pending rewriting. I've been slowly examining OpenGL and 3d graphics, and I'd like to use these in the game eventually. That's still a long way off, though.

Things planned for the sixth alpha: Any functioning animation sequence to signal what blocks are being destroyed. Further enhancing of the scoring routine. Help the visual problems. Music and sound effects. Start to prepare for the first beta version and how the main systems of the game should be rewritten.

The sixth version is now in the middle of a pretty extensive reorganization and rewriting process. It's progressing quite slowly. 06/10: I thought for a moment that this was abandoned, but the new version started to work. There's still an uphill battle of gluing it all up together. Currently most of it works, and I think all the new game-breaking bugs have been fixed. 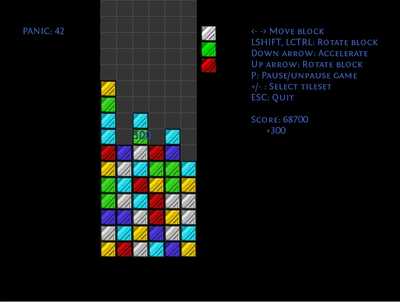