A very simple cute two-player puzzle game made in 5 hours.

Jordan Trudgett
(tgfcoder)
NOTE: The graphics is NOT mine. The music is from http://entropymusic.com/ (free music)

I will release the source-only version soon, however there is also a copy of the source with the Windows Binary archive.

Open all chests and meet up (both stand on the same square) to finish a level.

Small fenceposts will become a normal fencepost after walking over them once. (First appearance is in level B-1)

The game quits after finishing the last level.
Do make your own levels, in the Levels/ folder.
The first line is the level name, then the dimensions, then the map as ASCII. 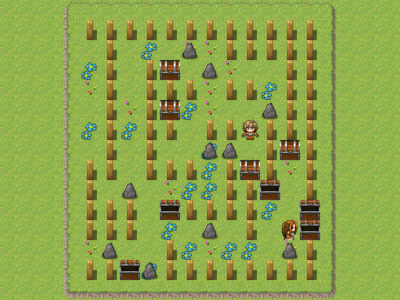