Frinkiac-7 Pybomber is a multi-player network party game. While the game contains nearly every feature from the original version, there are a few extras that you probably haven't seen before.

frinkiac
(frinkiac)
The main goal is to eliminate all other players from the level by blowing them up with bombs placed on the game field. Throughout the game, players place bombs, which soon explode and destroy bricks and players in their path. Bricks reveal powerups, which can be accumulated to enhance bomberman power, speed, and other abilities. You want to watch out for viruses though; they have bad effects and are contagious. Bomberman can be played in two ways. The first is a local game where up to ten players can play on one computer, using either joysticks or the keyboard. However, there is a limit of three keyboard players. The second is a networked game of a maximum of ten players, with one player on each computer. 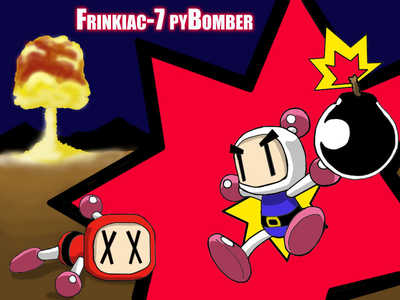