Radomir Dopieralski
(sheep)
Explore random dungeon, manage resources, collect parts for your machine and, most importantly, kill tons of monsters along the way. It's a mix of old-style console action-rpg display and even more old-style roguelike gameplay, set in a steampunk-ish setting. That's all planned, of course, so far you can just walk around the map and hit the monsters.

After another burst of activity, the development somewhat stalled. This version has a lot of refactoring and additional effects, including rotation animation and better combat animation. After some experiments with field of vision I need to somehow change the way the map is displayed -- at the very least, display some border around the rooms, probably also display room walls. This, and a lot of real life interference is stopping me now, so I decided to post an (unfinished, still not playable) version, just so that it is not lost. 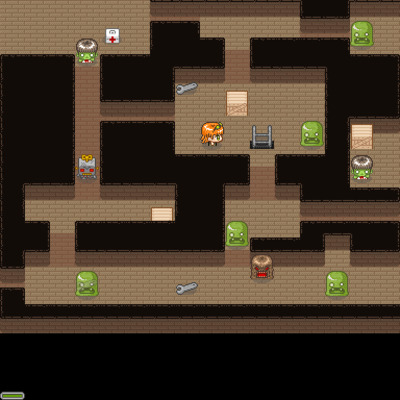