A basic client-server interface for networking games in the making.

Barry
(isharacomix)
A server-client system in development. Right now, it's optimized for 2-player board games, but in the future, I hope to abstract it so that it will work for any network applications. See the README or the project page on my website for more details. It's VERY insecure, and I don't recommend trying it on Windows. The only game implemented so far is Tic-Tac-Toe. There's a step-by-step process on starting the game in the README, and there'll probably be a video showing how to get it to work on my site soon. Feedback and suggestions would be very much appreciated.

Once again, I hate to upload this project so soon, but I re-did the whole thing and I just wanted to throw it out there (for no reason whatsoever). I rewrote the entire system using Geometrian's Mastermind networking lib (here on Pygame.org), and the engine still works (for the most part). I'm not happy about the unusually high code sloppiness, since it's just a quick networking hack I built to get a feel for the networking system. Yet, despite everything that seems to go wrong, it's not that hard. Or maybe Mastermind just makes it so easy... 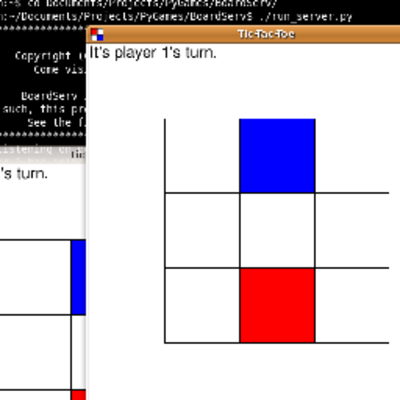