Just use the cursor keys and the space bar to shoot the other tanks.

Koen Lefever
(koenlefever)
Just use the cursor keys and the space bar to shoot the other tanks.

This is my first program in Python (my first program in an Object Oriented language for that matter) and I'm rewriting it completely to support client/server multi-player gameplay. For now Arcade Tonk Tanks is a playable demo in which you can play the red tank against the computer.

Arcade Tonk Tanks now has new scenery (including water) created by Marc Carson and new explosion graphics created by David Howe. The too-many-bullets-error has been corrected. The source code is no longer in a single file.

(The source code contains a comment that this is not a release version. Please ignore that, I just forgot to delete the comment.) 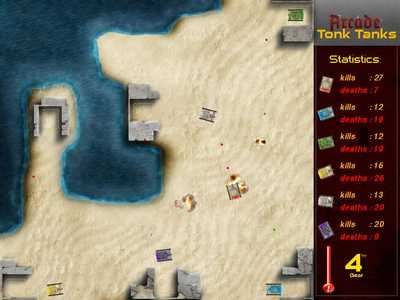