Sami Hangaslammi
(shang)
Pygame Extended (or pygext) is my "everything and a kitchen sink" collection of libraries for Pygame development. The main part of pygext, is the OpenGL accelerated 2D framework (pygext.gl) for rendering and controlling sprites. Pygext also contains additions to pygame.draw (e.g. rectangles with round corners) and an opengl accelerated 2D vector graphics library (experimental).

Pygext is currently 100% pure Python, so parts of it might still be a bit slow on less than high end PCs. However, I've tried to design the code to be as psyco-friendly as possible, so you will see quite a noticeable difference with psyco enabled. Remember to add import psyco; psyco.profile() at the beginning of your applications.

* Use layers to control rendering order (unlimited layers per scene)
* Sprites you can rotate, scale and alpha blend
* Sprites can be attached to each other for synchronized movement
* Framerate independent animation and movement
* Control sprites via "Actions" instead of manually
updating coordinates every frame
* Fully featured particle effects
* Collision detection
* Scenes and states for structuring game logic

No major new features in this release, but several small bug fixes. Most work has been directed at pygext's C++ rewrite, "Opioid2D", which is entering a closed pre-alpha phase soon. If you are interested in taking part, see http://opioid-games.blogspot.com/2006/06/opioid2d-pre-alpha-program.html for more details. 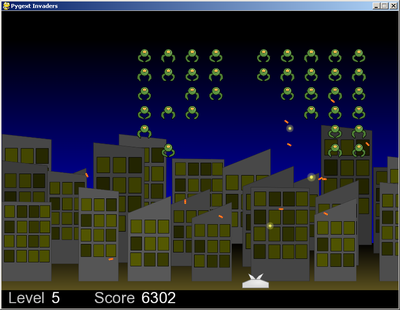