Farmyard Round 'em Up

Farmyard Round'em Up. Animals are escaping from your farm! Catch them before they leave using the mouse to control the farmers.

Hanna Bao
(hbao01)
The game takes place on Hoggett Farms, a small ranch in rural New Zealand where three brothers keep chickens, geese, pigs, ducks and cows. They live a simple life on their small piece of land and donâ??t generally experience much excitementâ?Š until one day. The Hoggetts arenâ??t particularly mean farmers, but they tend to expect a lot of hard work from their livestock, and donâ??t believe in the concept of a break; now the animals have had enough. After a rousing speech by a particularly surly swine, the perennially perturbed barn-dwellers burst from their home, located on the bank of a river. The Hoggett brothers must catch their livestock before they escape into the wild, never to be seen again. The farm cannot sustain itself if it loses more than 3 animals, so the brothers must be diligent. 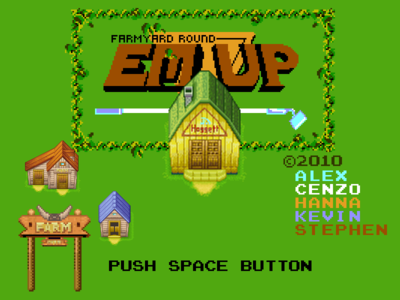