PyWright is a game engine and scripting language allowing for the creation of games in the same style as the Phoenix Wright or Ace Attourney series of games made by capcom for the Nintendo GBA and DS. Several cases have been completed and are available through the download option on the menu when you run PyWright.

patrick mullen
(saluk)
The general architecture for PyWright, is a set of art assets, an interpreter/engine to run the games (which are written in a scripting language designed specifically for this type of game), and an update program to download more art, other people's games, or updates to the engine.

A game consists of a folder which contains "cases" or chapter folders; and the actual scripts and unique content are placed in these folders.

The engine contains many features, such as textboxes, lipsynced characters (lipsynced to the printing text, not to voiceover), special effects, logic, and the various engine features from the Ace Attorney games. It can be run in software or hardware rendering (using pygame or pyopengl respectively), in dual screen mode (emulating a DS) or single screen mode, as well as different resolutions.

The scripting language has evolved considerably since it was originally designed, although it hasn't fundamentally changed much. It will likely remain 99% backward compatible from this point on. The syntax is fairly simple - one command per line, with commands supporting different numbers of arguments. It feels somewhat like BASIC (including the use of GOTO), but with a few borrowed elements from other languages. It's not meant to be a general purpose language.

On Windows, the windows exe version should work fine. On linux, the dependancies shouldn't be too hard to track down. On Mac, it is recommended to not go with system python but instead to use the mac port of python2.5 from this link: http://pythonmac.org/packages/py25-fat/ and the pygame package for python2.5 found on pygame.org. (A mac py2app port is available as well).

So many changes since the last version. Download it, download a couple of the games: Trials and Tribulations, and PW - Contempt of Court are spectacular. Mercurial repo at google: https://pywright.googlecode.com/hg/ 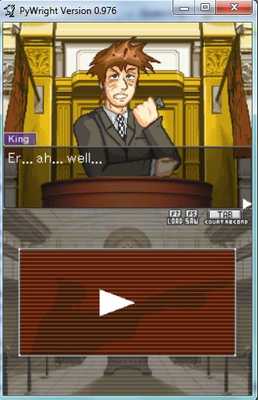