TaiuÃ£ Pires
(tay)
it's an arcade style game that uses only pygame. the goal is to be the last ship in the game. the RULES are: if you have more points than anyone else and get hit by an alien you'll ressurect (as manner of speaking). every alien you blow will switch to the color of your ship if the alien you blow IS the color of your ship yoget 10 points, otherwise you get 20 points. the blue item is the laser canon and the red one is bullet time. CONTROLS: p1: arrow keys to move, right ctrl to shoot. p2: a,w,s,d to move, space to shoot. p3: j,i,k,l to move, p to shoot. p4: (num pad) 1,5,2,3 to move 0 to shoot. Please remember that the original idea is to play using joysticks (they're automaticly configured) and NOT the keyboard(imagine 8 hands in 1 keyboard). it wasn't easy to choose the controls, it was the best I could think at the time. I'll work in a controls screen next for version 1.4. In a few days I'll put an english update for vesion 1.2.

it's done at last. I've promissed to some of you the 1.4 version to be released still in this month so there you go. THIS RELEASE: well in this release the comands configuration have been fixed, the respawn have been changed (right before you come back to the game the aliens IN the respawn place are destroyed, therefore you won't respawn IN an alien and consequentialy dying again), the total shots on screen have been raised from 7 to 32, a credits screen have benn added as well as artwork in the menus, and new ships' sprites (no more of galagon ships, these are completely original). THE FILES: like last release the source code is blocked with a password, just email me for it for all of you that have the password it remains the same the "Mac URL" is actualy an compiled version of the game for Linux users FOR THE NEXTS RELEASES: --better artwork for the menus --more AIs for custom matches (CPU1,CPU2,CPU3,...) of different levels --controls for the credits screen (up/down) if you have suggestions contact me. but the next one hardly will be done in february. 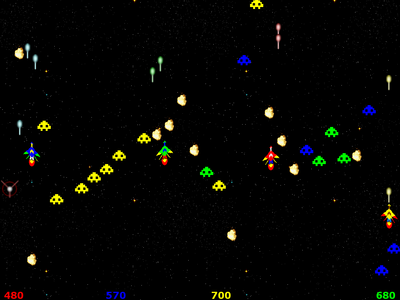