An alien, space environment reckless company has decided that our solar-system is the ideal place for storing their nuclear waste. Now it's your job is to clean it up!


An alien, space environment reckless company has decided that our solar-system is the ideal place for storing their nuclear waste. Unmanned spacecrafts has been seen all around the solar-system, beaming out dangerous waste pods. This has become a threat to all space travel and now it's your job is to clean it up!

(Programmers note: The nuclear radiation has messed up the space time fabric so don't blame me if there are two Earths or if Jupiter has a single moon very much resembling mars.)

Controls
Build your own levels!


There is actually a built in level editor in Slingshot although it's not accessible from the main menu. I made it mostly for my own use but since I need help with creating levels I have released some documentation for it. The documentation is included in the download file.


Sound
On some platforms there can be problems with the sound playback. To fix this you might want to try and change the SDL-mixer settings in the Slingshot configuration file. You find it in [slinsghot install path]/data/config/game.ini

Stretched fullscreen-mode
Slingshot runs with a 800×600 resolution. But when running the the game in fullscreen on a widescreen display the game display gets stretched out (looks horrible). On some systems (i think at least nvidia has this) you can set the video driver to use fixed aspect ratio scaling. This should make things look a lot better.

Mouse speed
Sometimes when running in fullscreen-mode the mouse moves extremely fast. You can set the mouse speed in [slinsghot install path]/data/config/game.ini. To get the mouse to move slower set the value to a number less than 1.0.

There is a solution to this problem! Open the configuration file at [slinsghot install path]/data/config/game.ini and set GRABMOUSE to True. This prevents the mouse from leaving the game window. Very handy! 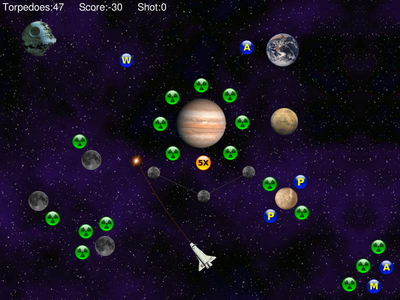