A simple shooting game with aliens that move in different patterns, missiles to kill them, and bombs to kill lots of them. I am currently continuing to develop this game, adding new features and learning more basic features of pygame and the python standard library. Hopefully my code can help other newbies learn the basics as well :) For my latest code, follow the home page link to the repo. For a specific release, follow the source link to the specific release.

Jonathan Pritchard
(jpritcha3_14)
Use WASD to move the ship, space to fire missiles, and b to drop bombs. New in version 3.0: * Yellow alien type that crawls horizontally across the bottom quarter of the screen * Scrolling background of stars with a seamless loop behind the game and menus * Start menu with 'start game', 'high scores', and 'quit' options * SQLite database to store persistent high scores Things planned for future releases: * Sound effects for bombs and explosions * A boss fight of some sort :)

I have implemented most of the basic mechanics of the game. I'm tweaking the speed and movement functions. It's not particularly 'fun' at the moment, but it's a workable starting point :) Things planned for future releases: * Limited number of bombs and a power up drop to get more of them * A shield power up that allows the ship to take 1 hit before exploding * Levels that have waves of aliens that move a progressively faster speeds ~ On screen display for current level, score, and aliens left in current wave * Sound effects for bombs and explosions * A boss fight of some sort :) 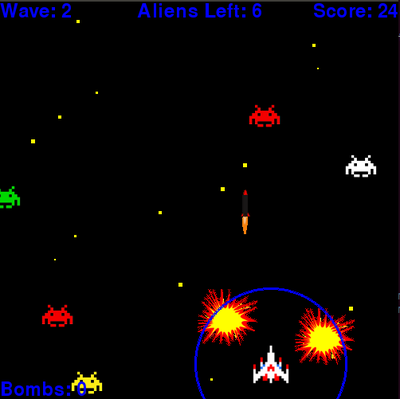