New Features: Skidmarks! Braking and boosting now leave a mark on the track surface for the duration of the time trial. The ghost replay seen in the display laptimes screen shows the track with skidmarks present as they were at end of the time trial. Braking leaves twin skidmarks (front/rear) whilst boosting leaves a single track (rear) Going off the racetrack also leaves tyre tracks on the grass. Altered Bike Behaviour As part of the new skidmarks feature the bikes now skid under braking and acceleration due to boosting. The length of slide is dependant on the bike speed. The affect of the skid has been softened from earlier (unreleased) versions of the code where hitting the brakes during cornering would lock the direction of travel and send you straight off - now the rotation still happens during braking but as part of a more controllable drift. Bug Fixes Fixed issues with larger screen sizes Removed support for 640 x 480 Fixed ghost replace freeze after displaying 1 ghost lap in lap time screen Fixed irritating Python 2.7 timing bug (dividing 2 integers returns an integer in 2.7) Other code cleanup / dead variable removal 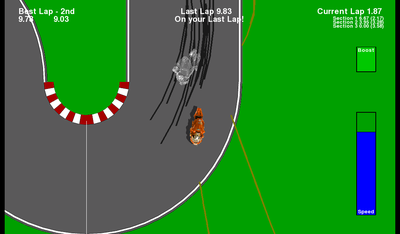