Tobias Duehr
(natasbordello)
epMEDIA is mainly a very basic graphical filebrowser with the built-in ability to play musicfiles (playlists as well) and show pictures. Other functions and filetypes (e.g. videos, roms) can be handled through other applications (e.g. ZSNES for snes-roms). It's supposed to run on TV-Screens (800x600) on not so powerful PC's. epMEDIA runs pretty fast on smaller CPU's (like the Via C3) because it's not that featureful. Cheap trick. No TV, no programguide, not even weatherforecast. Faster startup. Anyways, if you need that features and got a fast pc, epMEDIA may not be your first choice. It's mainly an audio-jukebox.

Finally added the SHOW_PICTURE function. fixed many bugs. Added base skin wich uses an overlay (looks cool, slow). Pageup/down works now, added some features to all skins (mostly playtime). It's now possible to run epMEDIA at any resolution, but currently only 800x600px skins are included. 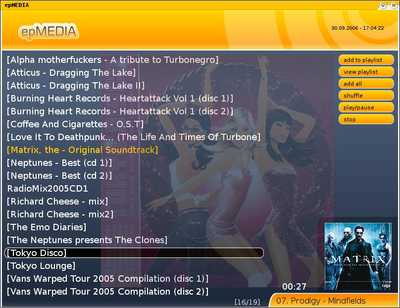