Avoid the boxes on the map with one single button, space!

Marcus MÃ¸ller
(marcus)
"One Square at a Time" is programmed in Python2.7 using pygame, therefore it should be easy to port to lots of other operating systems, but I can't test that at the moment, since I'm doing the work on my desktop Linux PC. The goal of the game is to enhance and train my Python and pygame programming. At the moment there's a Linux version and a Nokia N900 version, but it shouldn't be a problem to port it for other OS's. The source is provided and licensed under GPLv3.

Added a new way to load the different maps you've made by using a terminal argument. If I've got a map called foo.map, I'd start the game like this: code: $ python2 CApp.py foo.map Also started on a Space is Key mappack, which is very dull at the moment, because I find it hard to make it just as advanced as the maps in Space is Key really are. 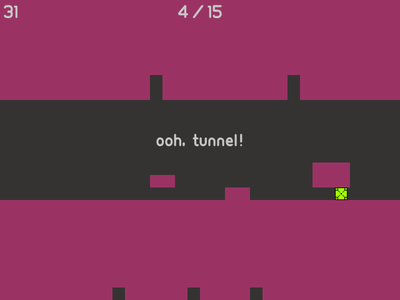