Brian Thorne
(thorney)
A project exploring using the new Camera module for basic computer vision. Currently has example with eye and face detection, based on opencv's Haar classifiers. There is a edge detection example that uses either scipy's signals module, numpy convolution or pygame's transform. There is an opencv camera wrapping class that allows an opencv camera to be used with pygame. Adapts the numpy cvmat returned by opencv into a surface. Implements a VideoCapturePlayer class which can be used as a base for doing simple image processing on live video. A process can be given (as a function) that is run on every frame between capture and display. Alternatively it can simply display live video. It will try use the pygame camera module, if this is unavailable it will try to use opencv for image capture using the wrapper mentioned above. http://bitsofpy.blogspot.com/search/label/pycam 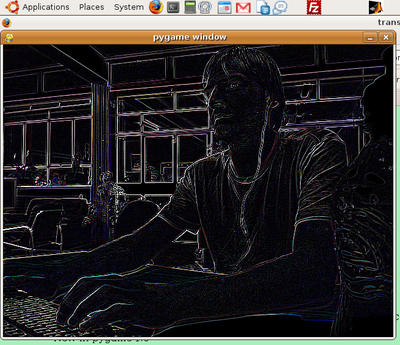