This is my first attempt at an original arcade-style game. It started as a decision to poke at PyGame at 4AM due to insomnia, and then 6 hours and 250 lines of code later, we have this. It's not exactly a highly polished game, but I've had fun playing it.

The objective of Pulsar is to avoid being hit by lasers for as long as possible.

Controlling the Pulsar, however, may take some getting used to. The Pulsar is attracted to your pointer, and will always try to move toward it. More often than not, though, the Pulsar will overshoot, flinging itself away from your mouse. In order to succeed, you'll have to learn to use this to your advantage. You can also specify the speed of the Pulsar's lateral movement with the position of your mouse. The further your mouse is to the right of the playing area, the faster you will move. Note that traveling at such high speeds is dangerous, and not always recommended. The third and final control available to you is the Hold ability. By holding down the left mouse button, you can stop your Pulsar from, well, pulsing. However, this cannot be done indefinitely, as indicated by the cyan bar at the bottom of the screen.

Apart from the lasers, whose very touch results in a loss of life, you will also see Blue Diamonds drifting by. You'll want to collect as many of these as you can, as each one provides a nice score bonus, as well as a partial recharge to your Hold ability.

Scoring is determined based on an exponential factor of the Pulsar's current size and speed, with a multiplier based on the current difficulty level, which will increase over time. You will earn a new Pulsar every one million points, and trust me, you'll need them. 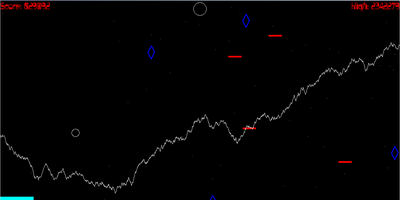