Real-time 3D vector world with a moving light source, shading and shadows. A reproduction of my 1992 Commodore Amiga demo routine.

Kalle Saariaho
(zeque92)
This demo moves through a small 3D cityscape with roads and houses, all simple (non-textured) vector objects, but with light source based shading and shadows. Light source and objects can be defined and moved around using a simple XML definition file. The demo is a reproduction of my 1992 Commodore Amiga demo routine in "Sound Vision" by Reflect, which won the first Assembly demo party demo competition. It would be relatively straightforward to replace the current movement system with user steering, but this being a demo, there is none. I have written a blog about the routine. There are eight parts, each building on top of the previous one, part eight containing the finished project. 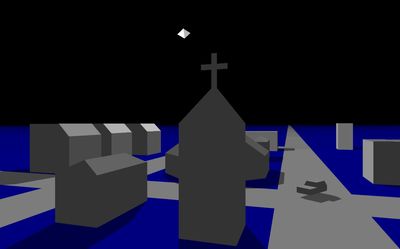