Survive an alien invasion at the park

The warm spring day started well enough: a bowl of your favorite cereal, a few cartoons, and then a ride to the park with your sister. You promised your mom that you would take care of the girl and then she kissed you both good bye.

A few minutes later you saw flashes in the distance. Then you heard the screams. Aliens have invaded, appearing as if by magic.

The goal of Alien Park is to survive the alien invasion while finishing the quests presented as the story unfolds. If all goes well you might save your sister, join forces with local authorities, discover the alien intentions, and save the world. Otherwise, you can always try again.

8 weapons and 3 other selectable items

music and over 40 sound effects

Use WASD keys to run and the mouse to aim

Use the Mouse Wheel to cycle through available weapons

After cycling, use the left or right mouse button to select a weapon on that side

Your gamepad must have two control sticks to work!

Enable gamepad controls and configure them in the options menu

Use an xbox or dualshock controller

Use the left stick to move

Use the right stick to aim

Use the left and right triggers to fire

Use the left and right bumpers to cycle weapons

The current Windows version of Alien Park requires Windows 10. Future versions of my games should support older versions of Windows. The Linux version should also work on Windows if the following conditions are met: you have software to decompress tar.gz files; you have Python 2.7 or 3.5+ installed, and you have pygame installed(use 'pip install pygame').

Contact me if you're running Windows 7 and wish to help me build a Windows 7 compatible version.

This beta version probably only runs on Python2, but future versions will support Python3 like my other pygames. Linux Mint and perhaps other Debian/Ubuntu-based distributions of pygame1.92 through pygame1.96 include a bug in pygame.mixer that causes high CPU usage. I recommend using pygame 1.9.1(standard on most distributions) or pygame2-dev for playing this game.

AlienPark.tar.gz includes pygame1.9.1 for the above reason. Delete the 'alienpark/bin' directory to use the locally installed pygame version instead.

I do not support Apple products but this game might. The Linux version should work if you have Python and pygame installed but this remains untested.

Note: my games are not casual, and touch controlling them should not be attempted by the feint-hearted.

This software is a work in progress and is provided as is, without warranty of any kind. The author maintains ownership of all code, graphics, sound effects, and level data included with the software. This software may be used freely but distributed only in its original form. 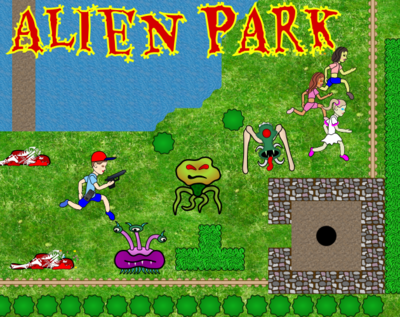