A.J. Venter
(metalpoetza)
Watching my 3 and a half year old daughter taking her first steps in gaming, I've been observing what she struggles with. I feel there is a real gap for games that are playable by children not yet old enough to read, but beyond the simple activities in gcompris's earlier levels. More-over I'm a big fan of the idea of learning without knowing it - rather than setting out to teach a specific skill, I like the idea of learning things just by playing. And if there is a skill worth learning from gaming, more than anything else, it's simply how to solve puzzles. This is the game I came up with. Core design goals: I think a semi-side-scrolling platformer like the original Super Mario Bros is the easiest to learn - but Mario (and games like SuperTux) are still too complex, some things need to be reduced to fit a 3-year old's abilities. No jumping. Nothing time-based. The game should be slow, and not require fully developed spatial reasoning to play. It shouldn't rely on fast reflexes either. So all screens must be walkable, and the challenge should come from puzzles that are more about simple reasoning skills than speed. Controls should be simple. I think controller support is a must, but even then it should consider that the players have small hands which struggle to reach the triggers and top buttons. So a very simple scheme - movement on the left joystick. Actions on the 4 buttons (keyboard variants can be done - I'm not sure if keyboard + mouse is worthwhile, it's too reliant on fine motor skills that aren't quite there yet). Vertical movement should use ladders and slides, concept a three-year-old are already familiar with from the playground. Only four basic actions. For my game, I'm thinking spells. And you start with just one - more can be added over time as the child gets familiar with the idea. So a simple magical game, in a world of realistic looking toys - on a simple 2-d platform. It's not a nightmare to code, and the work can instead go to the art and level design. Child-friendly content. Combat, if any, should be on the "My little pony" level of violence only. Instead of a spell to set an enemy on fire, I'd rather have spell to simply turn him into a harmless creature like a mouse, with some implication that the spell is temporary and will wear off sometime after safely leaving the area. While I subscribe to the theory that good fairy tales should teach children that monsters can be killed there is plenty of other ways to learn that, there should be space also to just have fun and learn to solve puzzles and maybe learn that not all monsters HAVE to be killed to be defeated. An equally important lesson. Backgrounds should reflect the regions the current set of characters derive from. Some of my African landscapes for levels using her animal-toysets, thus teaching (very subtly) a simple bit of geography and the idea that different creatures live in different places. That said, there should be no shortage of fantasy here. This is learning through play - and I think imagination is far too important at that age to focus on realism beyond the scenes based on what is already real. Everything that is written must also be voiced (I'll need help here), including the opening menu etc. It must be navigatable by children who do not yet know how to read. A rock solid set of editing tools to allow parents to easily add new levels, and a way to share those levels so that everybody can benefit. This would also allow the game to be much bigger than I could do on my own, and I could ask Caryn to help make some levels. These tools should give full access to the pre-existing assets and sprites, as well as an easy way to import your own. So level design should be possible without knowing how to do green-screen stock-motion animation, but those who do, should be able to add new creatures. This rather rules out things like gamemaker or rpgmaker simply because they are too complex. While that is great if you want to create your own game for older audiences, it is overwhelming to a three-year old. I've set out to create games before, and never finished them because it was too much work on a busy working parent's schedule so on this one I'm setting out also to make the work-load manageable, partly by making as much as possible creation accessible to other people. On the other hand I have successfully finished a game as well (tappytux long ago), and part of why it worked was that it's major additional content could be crowdsourced - there were wordlists in dozens of languages at it's height - and the coding was written in such a way that, once the engine was completed, only bugfixes and optimization was needed - new additions did not require new code. That's a design imperitive now i think (it also helped that, at the time, this was done as part of my job and on company time) Code should be available however, so parents who can code can make modifications, improvements and customizations for their own kids unique needs, and be freely share-able afterwards. The code will be GPL'd however. While I understand this is unpopular in the gaming community, I want everybody to benefit from every improvement. I am happy to put the artwork under a more liberal MIT license and use MIT-licenses art from other people. 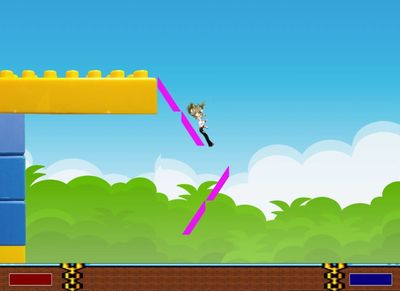