Ages of the island

This is "Ages of the island", a real time strategy game based on the classical board game "Die Siedler von Catan" for many players connected online.

Emerson León
(emersonleon)
This is "Ages of the island", a real time strategy game developed on python-pygame, based on the classical board game "Die Siedler von Catan" for many players connected online. There are many features not yet implemented, but this is the first playable version. A single player can play alone, but it is designed to be a multiplayer game. One of the players must begin a new game (as host), and all other players need to know the i.p. address of the host in order to join the game. When all players are ready, the map is shown and the game begins. To know your ip address on linux: sudo ifconfig and look next to "inet addr:". On windows: ipconfig The goal of the game is to build settlements, roads, cities and more, to be able to gather resources and be able to build even more. Players interact at the same time in the same board, so strategy is important. The main keys used are the following: Arrow keys: Move the token Space bar: Buy stuff (currently settlements only) To kill the server loop press Ctr C (Keyboard interrupt) after all players are gone. 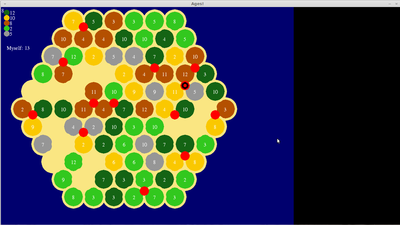