"20,000 Light Years Into Space" is a single-player real-time strategy game with a "Steampunk" sci-fi theme.

In this game, you have to build and maintain a steam distribution network on an alien planet, while under attack from aliens and other hazards. The game has three difficulty levels, an interactive tutorial, and a scoring system.

"20,000 Light Years Into Space" gained second place in the Pyweek March 2006 Individual Entries category. Since the competition, the game has been improved in a variety of ways. 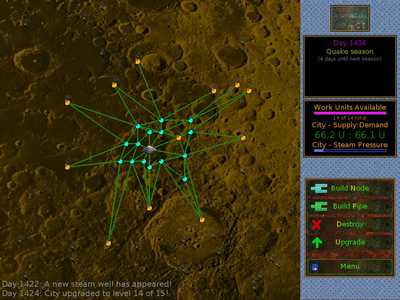