A scratch ticket game. But not as you might expect one to be.

I just had to make a scratch ticket hack. Then I just had to turn it into a game. But it might not be what you would excpect it to be.

Within 10 seconds you have to remove as much as possible of the ticket cover. You scratch by using the included coin.

Underneath the cover you'll find the current highscore list.

If you download the sourcecode version you have to make sure that you have PyGame 1.9.1 installed. The windows version has everything included.

If you want to use PyGame 1.8 I've released a patch that can be downloaded from the homepage. 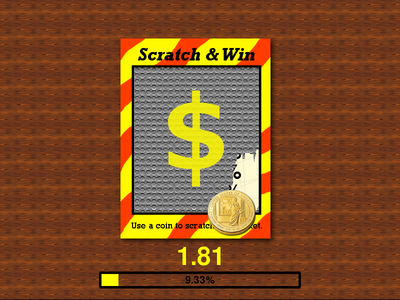