A platformer/puzzle game in which the objective in each level is to reach the goal, often rotating gravity in the process.

GraviQuest is a platformer/puzzle game in which the objective in each level is, unsurprisingly, to reach the goal. However, this task is made slightly more complicated by the fact that it will often be necessary to 'rotate' gravity in order to reach said goal.

To play the game, run 'main.py'. This will start up the main menu, from which you can select from one of many now-working options (only 'Instructions' isn't implemented yet)!. Not content with just making a normal menu, I decided to make it a nifty spinny thingy - you can scroll through the options by shifting your mouse in the appropriate direction.

In keeping with tradition, you move your character left and right with the corresponding arrow keys. The up arrow is used to jump, and the 'Q' key quits to the main menu. Blocks with funky spinny patterns on them will rotate gravity - green rotates it to the right, and blue to the left (the spinny pattern also indicates its direction). The goal is marked out by a funky door graphic which I have still yet to replace with something more suitable :P


That's pretty much all that's still to be fixed :P 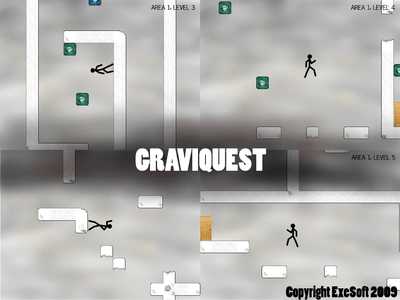