This is a fully functioning Chess Game developed in Python Using Pygame with many features.

Ankith
(ankith26)
This is a Chess Game developed in python Using Pygame. You can play singlePlayer, multiplayer and play online. You can save and load games, modify the app to your preferences. All features of chess included. It has move generation, move validation, test for check/checkmate/stalemate, pawn promotion, castling, enpassent and a wonderful GUI thanks to Pygame.

THIS IS THE BIGGEST RELEASE OF MY-PYCHESS EVER RELEASED. The code now comes with MIT License instead of the GPL-3 which came with v2.2 The code was revamped, fixing minor bugs and MAJOR PERFORMANCE IMPROVEMENTS. Version 2.2 ran at 22 fps, while this upgrade allows it to run at about 200 fps (on my PC) if fps is not constrained. Code is now more easy to understand with code comments throughout the code. EnPassant was be added (finally). Undo moves option was added. UI for loadGame menu was revamped, UI for preference menu was simplified. Screen flip was be added (so that both players get to play from their perspective). Save/load games with a new way of storing gamedata. Online play was be added. This features a ONLINE LOBBY and support upto 10 people to play chess(read more in ref/online.txt) Singleplayer saw BIG UPGRADES: A Good Menu, ability to play with a decent PYTHON CHESS ENGINE. Now, You Can play against STOCKFISH CHESS ENGINE (see stockfishchess.org). My-PyChess will act as an interface to give you this singleplayer mode. Included with this release, a good menu for stockfish and stockfish install/configure menu to help with installing and configuring stockfish with My-PyChess. Remember, stockfish is the best chess engine in the world, even though it's playing strength is limited, it still playes a very hard level of chess. Chess beginners may choose the PYTHON CHESS ENGINE written by me over stockfish. 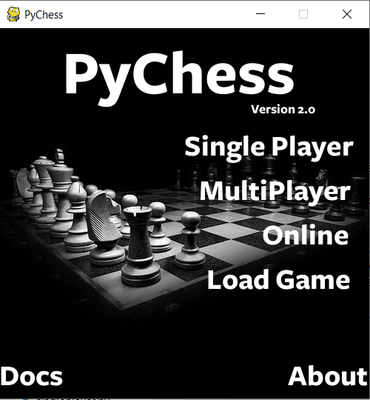