A turn-based strategy game where up to 4 local players battle to be victorious, by expanding their empires, and controlling units to conquer cities and attack the enemy.

Ben Ryder
(_bryder)
Although the game is now fully playable and released, it is far from the level I want it to be. I plan to make a few changes including visual improvements for the units and unit interface, and the addition of a tech-tree dynamic for researching units and infrastructure that can then unlock the building of farms, log cabins etc, which will then level up the cities instead of directly spending action points. In the meantime, feel free to give feedback or suggest improvements ! 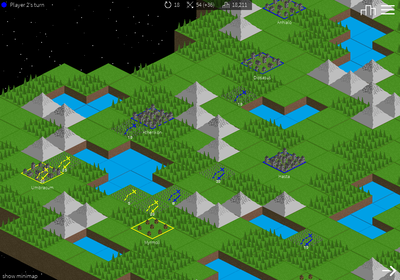